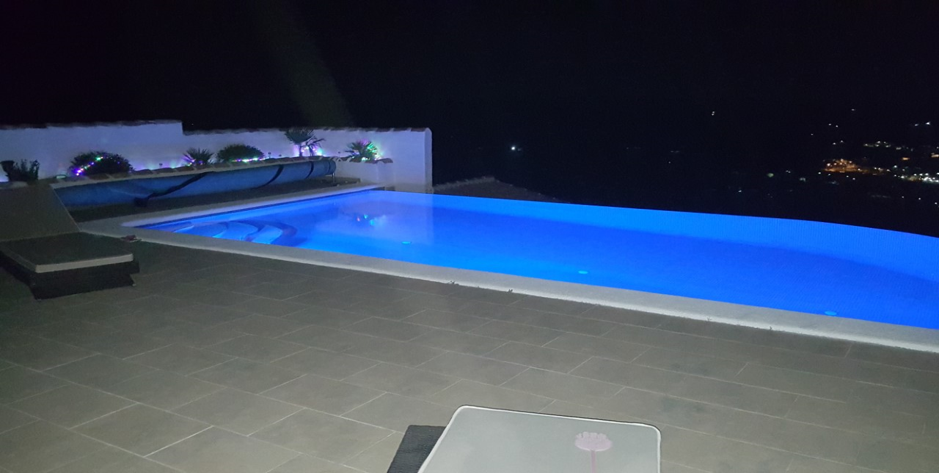 Just a short newsletter this month as we swelter in a heatwave that’s unusual even for southern Spain.  It’s been in the 40’s over the last few weeks and in the low to mid 20’s at night! Great for that midnight swim! Luckily up here in the mountains the finca sits into the hillside making it cool inside even when it’s roasting on the terrace.

Our local Fiesta has just completed its 5 days (and nights) of partying. For those not used to the Spanish way of life, Fiesta can be quite a culture shock. While there are things going on around town during the day for the children and in the early evenings at the temporary bullring where, yes, they do have a bullfight but also (more fun for most of us) an It’s a Knockout style competition with large inflatables, lots of water and several teams of crazy locals battling to be the champions, the main activity doesn’t start until about 10pm. Then the fairground really begins, the beer tents (run by the local churches) are open for drinks and tapas and the bands start playing on the huge stage. Children are part of this as evenings are cooler for them to play and the family orientation of the Spanish people means they are always included. We partied until about 3am one night but those much younger than us seem to manage to party all night, sleep and go back and do it all again the next night!  Well, for those who are not seeking a tan, daytime is too hot so why not have fun at night!

While we don’t expect the night time temperatures to remain so high for too much longer, we are hoping for an extended summer after the cool start to the season.  We have some guests coming in September but we still have space for a few more so, if you want a last minute break get in touch.  We would love to welcome you to Finca Xanadu.

Richard and I look forward to welcoming you to Finca Xanadu soon.

We may hold special interest weeks if we get enough…

We are Richard & Gina, both English but live in Spain after having had careers in Business and the Civil Service......

Xanadu is just under an hour from Murcia International Airport and a little longer from Alicante, Almeria or Granada airports.

Spain offers a great Train line to all major cities but is limited on more rural lines and destinations, our closest station is at Lorca- a 30 minute car journey away

Car hire at any of the airports is easy and very cheap or we can arrange transfers for you at an additional cost.